Yu 輿: a chariot, but also the box of the chariot: 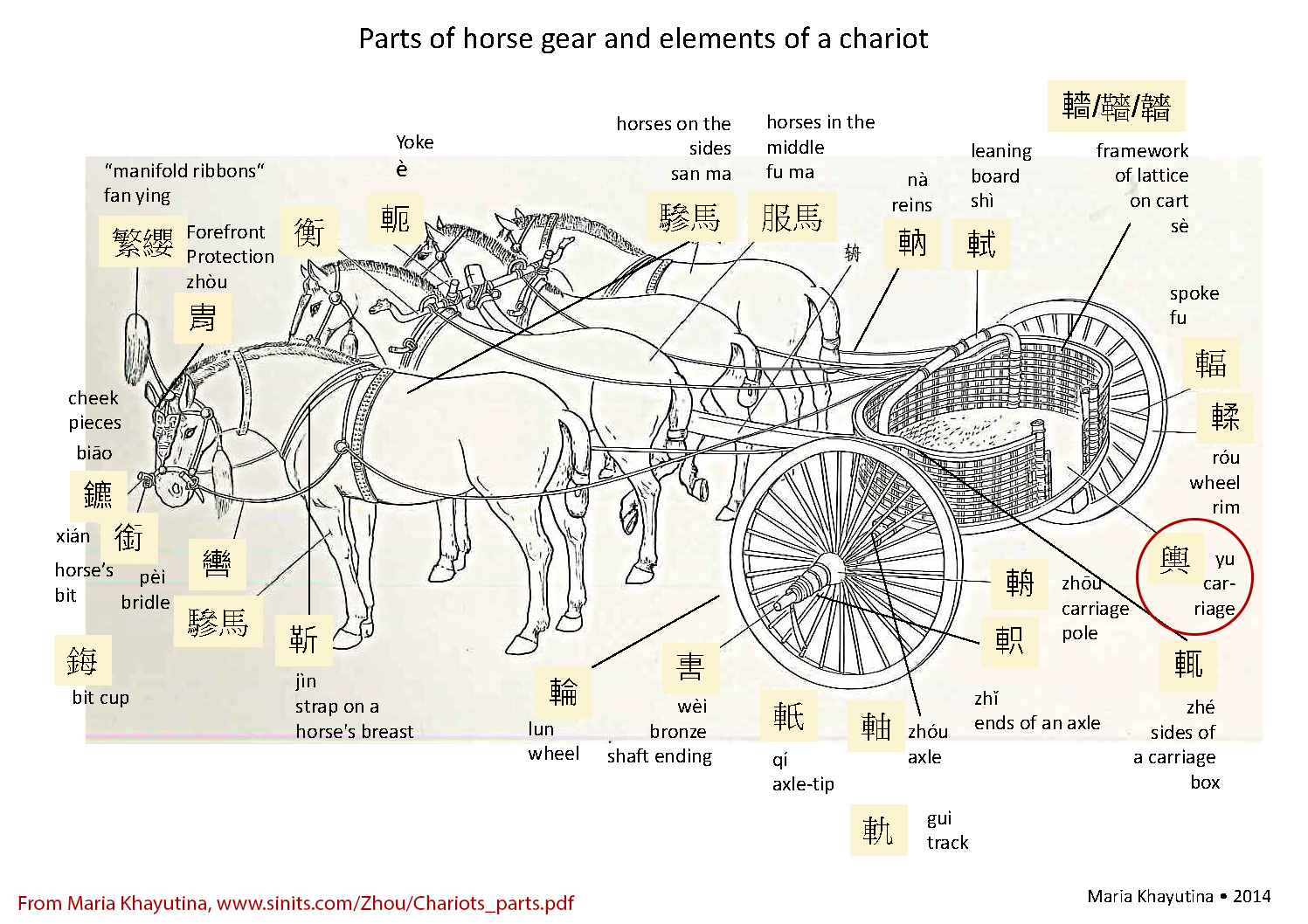 蔽芾甘棠、勿翦勿拜、召伯所說。
[This] umbrageous sweet pear-tree; –
Clip it not, bend not a twig of it.
Under it the chief of Shao halted.
– Shijing (tr. Legge)

Fu 輻: spokes of a wheel (see image above). It is very likely that this is a scribal error. There are several indications that fu 輻 was originally written as fu 輹:

輹訛為輻。凡稍通小學者皆知之。不贅述。
Fu 輹 is an error and should be fu 輻. Even those who only had elementary school are aware of this. It is not necessary to give more details about it.

But in the light of what we know now it might very well not be an error.

The sentence 輿說輹 also appears in the second line of hexagram 26: hexagram 9 is xiao chu, ‘small accumulation’ and hexagram 26 is da chu, ‘large accumulation’. Here the Shanghai Museum manuscript gives fu 复. The character 輹 is also mentioned in the fourth line of hexagram 34. This, in combination with the old texts mentioned earlier, makes it more likely that 輻 should be read as 輹. It makes more sense when you examine the context. Fu 輻 are the spokes of a wheel. If their removal or breaking is what the text is trying to transmit, it would be more likely that the text would say ‘the spokes are removed from the wheel‘ instead of ‘the spokes are removed from the chariot’.

Legge also discards the reading of ‘spokes’ in this sentence. He translates the beginning of the line as “The third NINE, undivided, suggests the idea of a carriage, the strap beneath which has been removed…” This is similar to his translation of the second line of hexagram 26: “The second NINE, undivided, shows a carriage with the strap under it removed…” which shows that with the third line of hexagram 9 he reads 輻 as 輹. He doesn’t explain why he does that but he might be influenced by the jishuo 集說 commentary in the Zhouyi Zhezhong edition 周易折中 which refers to the text of Lu Deming that I mentioned earlier. The idea that 輻 should be seen as an error or as a loan for 輹 is followed by several authors (Li Dingzuo 李鼎祚 (8c.), Jiao Xun 焦循 (1763-1820), Gao Heng (1900-1986), Dennis Schilling, Rainald Simon, Margaret J. Pearson) and I’m inclined to do the same.

So what is a fu 輹? The Shuowen says ‘車軸縛也’: ‘to tie up the chariot axle’. The Zhouyi 周易 volume of the Shisanjing Cidian 十三經辭典 series explains the character as ‘車下縛，指車箱下鉤住大車輪軸的部件’: ‘a binding under the chariot. It refers to a part under the box of the chariot that hooks the axle to it.’ (p. 221). This website gives more detail:

车轴横在舆下，固定的方法是在舆的底部安上两块木头，用绳索把轴绑在上面。它的形状像个爬伏着的兔子，所以叫伏兔。也叫輹.
The axle lies across under the chariot box and is fixed to it by two pieces of wood tied with rope above the axle. The shape of these pieces resembles a crouching rabbit, that is why it is called a futu 伏兔, a ‘crouching rabbit’. It is also called fu 輹.

Ralph D. Sawyer mentions the futu in his chapter on chariots in Ancient Chinese Warfare:

The frame initially rested directly on the axle and the shaft at four contact points; a somewhat bowed wooden cushioning mount called a “crouching rabbit” (futu) may have come to be employed at the end of the [Shang dynasty]. Leather lashings further secured the compartment frame to the axle and shaft, with another mount sometimes having been employed just over the joint of the shaft and axle. (…) It was generally believed that the “crouching rabbit” was a Zhou dynasty innovation. (…) The incipient beginnings can be traced back to innovations at the end of the Shang.”
(p. 338, 495)

The futu has been described in a few selected articles as several chariots with this part were excavated:

The frame which supported the chariot box was made of four pieces of wood, with the front and rear pieces fixed into notches on the draught-pole; the other two pieces rested on wooden axle-pads, and both of these were made fast to the axle with leather straps.
– Lu Liancheng, ‘Chariot and horse burials in ancient China’, in Antiquity 67 (1993), p. 826

Lars Bo Christensen gives a detailed description of fu and its other names:

Support under the box of a carriage resting on the axle and holding it in position. Kang Xi Zidian: A piece of wood fastening the axle to the carriage box. In the dictionary 釋名 Shi Ming (200 CE) the word for clogs 屐 was also the name of the wooden part that holds the axle in place. Other names mentioned in the Shi Ming are 伏兔 (squatting hare), 伏 and 輹. An ancient Chinese clog had two tooth-like protrusions underneath the sole to keep the feet above the mud and this form resembles the 輹. The axle would be fastened with leather or rope to the wooden 輹.
Lars Bo Christensen, Book of Changes: The Original Core of the I Ching, p. 159 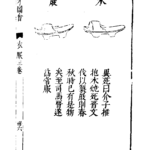 The ji 屐 that Lars mentions are wooden shoes which indeed had the shape of a futu, as the picture from the  Sancai Tuhui 三才圖會 shows. In Japan these are known as ‘geta’.

Here are some pictures showing the location of the fu or futu: 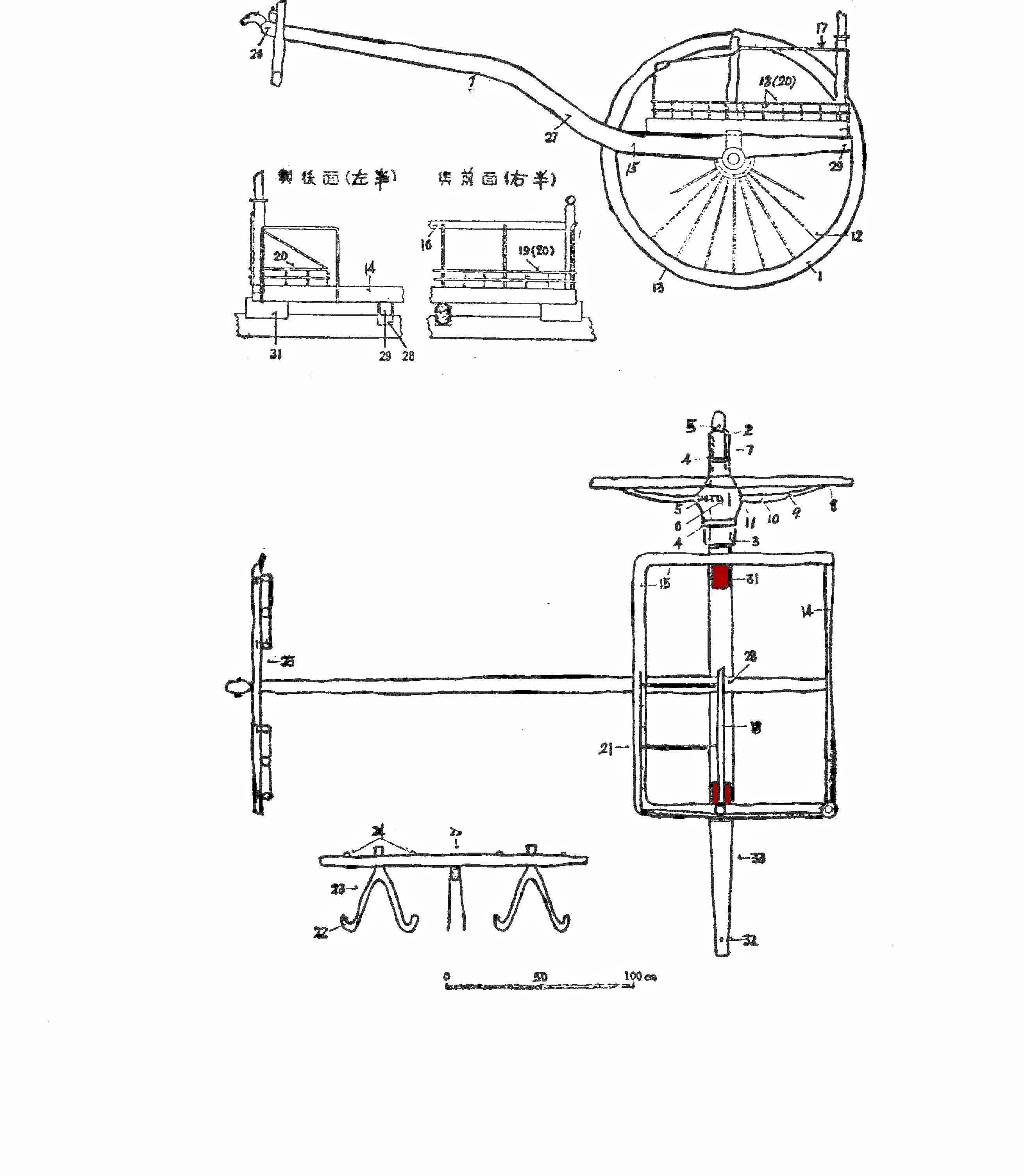 Zhu Sihong and Song Yuanru believe that the futu served as shock absorber.

The futu are tied to the carriage box with leather straps. The Shuowen gives a character for these straps: min 𨏵 (車伏兔下革也). An obscure character of which I could not find any examples of usage.

Yu 與 can refer to a chariot or carriage, but it is also the name for the box of such a vehicle. Because of this and combined with the other sources that I mentioned earlier, I believe that fu 輹, ‘axle pads’ is the right word here instead of fu 輻, ‘spokes’.

Axle pads come in pairs just as man and wife form a pair. When husband and wife are in discord it is like axle pads breaking from the carriage box: progress is not possible and things come to a halt.

The axle pads are breaking from the carriage box.
Husband and wife are in discord.