Going back to the source: the manuscripts of Richard Wilhelm (2) 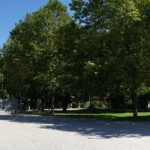 Munich is a beautiful city, especially with the sunny weather that it has today. My mobile informs me that it is 25°C outside but it feels much warmer. When I arrived in Munich, last Monday, it was much cooler. The archive of the Akademie can only be visited on Wednesday and Thursday so I spent Tuesday by playing the tourist, walking through the center of Munich and finding out how I should walk to the Bayern Akademie der Wissenschaften. In theory this should be a 15 min. walk but because of my complete lack of any sense for direction -which even brought Google Maps to the verge of despair- the 15 minutes became half an hour. At least I knew how long it would take me to get there. I was prepared. 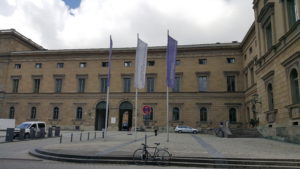 The archive of the Akademie is inside a building of the kind that Munich holds a patent on: old, with pillars and elaborate barok decoration and LARGE. It’s like ordering coffee at Starbucks: when you think they don’t come any larger you look around and behold there is even a larger latte. There were so many entrances to this large building that I had trouble finding the right way in. Give me a sign! I thought. Fortunately there was a sign next to the entrance.

The Yijing related manuscripts of Richard Wilhelm are only a small portion of his legacy. He translated numerous Chinese works like the Daodejing, the Lunyu, Zhuangzi and he wrote several books about Chinese philosophy and history. For all these books he kept notes and journals. I would very much like to see these documents as well but my time in Munich is limited so I focused on the documents that I had before me: his Yijing notes from 1919 and its successive years. 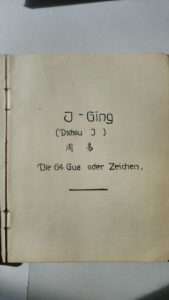 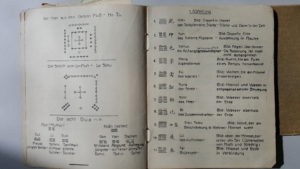 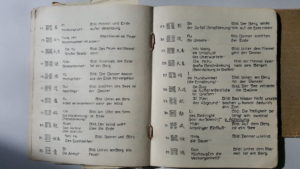 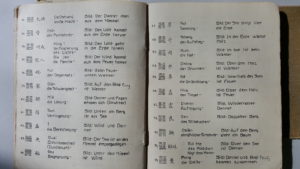 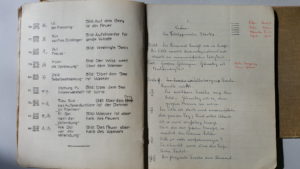 Wilhelm’s notes start with a booklet of which I found several copies interspersed with the rest of his notes and journals. I think he shared it with his friends or the visitors of his lectures. It contains a translation of the name and the first line of the Xiang 象 Image text that refers to the trigrams of the hexagram. The names of the hexagrams do not yet have the names as he gives them in his  book: hexagram 12 is called ‘Stockungszeit’ instead of ‘Die Stockung’, 47 ‘Die Not’ instead of ‘Die Bedrängnis (Die Erschöpfung)’ and 56 ‘Der Fremdling’ instead of ‘Der Wanderer’. In his notes of 1919 and further he changed some of these names, like with hexagram 56 where he has ‘Der Fremdling’ striped out and replaced it with ‘Der Wanderer’. This might be an indication that this booklet was written before his notes of 1919.

The booklet is followed by a draft translation of the Yi. Immediately at hexagram 1 you notice some interesting differences compared to his book. He starts with a translation of the Image text instead of the Judgment text, which follows next. Both translations differ from the current text:

Especially his preliminary translation of the fourth line is interesting:

His notes contain many of such differences. It shows that his book was still a work in progress. Wilhelm also marked the Ruling Line of the hexagram. At hexagram 1 and 2 he marked the line with two vertical stripes, but from hexagram 3 onwards he encircled the label of that line. The way he wrote these labels is used throughout all his notes and journals. 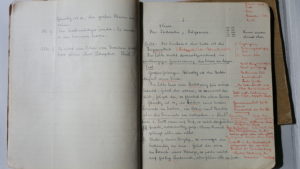 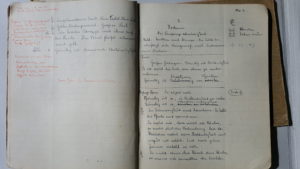 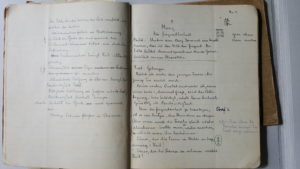 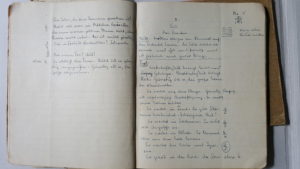 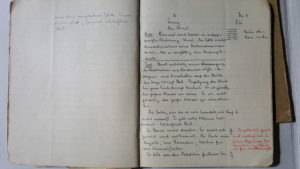 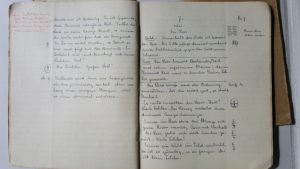 While reading Wilhelm’s notes I was taking photos of every page, intending to study the manuscript when I was back home. But I soon realised that this was an impossible task. There were simply too many pages, and if I would only concern myself with taking pictures I might miss the essential information that I was looking for. I put my phone aside and started to read, only taking pictures when I noticed something I wanted to preserve. 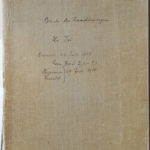 The order of the separate note books in the map was jumbled – they were not in the order of the hexagrams. When I had read the first part of his 1919- notes the next notebook was a translation of the Xici aka Dazhuan. This was the chapter that mentioned the sixiang! Carefully I started to thumb through the pages, looking for chapter 11 of the first section of Wilhelm’s Dazhuan translation.

It did not take long to find that chapter: without added  commentary the Dazhuan doesn’t take much pages. The result, however, was disappointing. 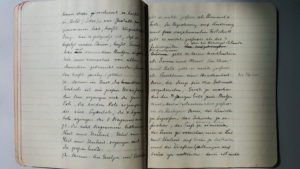 ‘(…) die beiden Pole erzeugen die vier Symbole, die 4 Symbole erzeugen die 8 Diagramme.’ Just as with the Yijing translation in his note books his preliminary translation of this line differs from the final version (‘Die zwei Grundkräfte erzeugen die vier Bilder. Die vier Bilder erzeugen die acht Zeichen.’). That in itself is worth noticing but it did not tell me anything about his view of the sixiang and how he would label them! This Dazhuan translation did not contain any commentary and without a draft of the commentary I would not make any progress in my research about the Four Symbols. The commentary was not between Wilhelm’s notes or journals. My disappointment was palpable. The archivist opened a window. It was getting warm inside his little room.

Lunch break was approaching. I closed the note book with Wilhelm’s Dazhuan translation and looked at the maps that I still had to open. In front of me were a few loose papers that I had not yet read. I decided to read them when I returned from my lunch break. I took a quick glance at the beginning of the first page:

Looks like an introduction to the Yi, I thought. But it was different from the introduction in his book. I scanned the rest of the page. It had to wait untill lunch time was over. Then I saw the last few lines, completely at the end of the page: 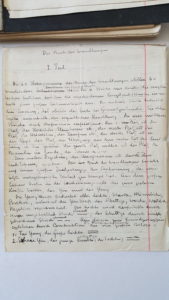 My heart skipped a beat. Lunch would have to wait.

3 Responses to Going back to the source: the manuscripts of Richard Wilhelm (2)