The banner of ‘qian’

There are a lot of things you have to keep in mind when you investigate the character qian 乾 from hexagram 1. First, there is the problem of finding the right components which form the character. Your first impression would probably be that the character consists of the component

on the left side, and 乞 on the right side. This idea would probably be strengthened by the fact that there are more characters with

. The last character was written in bronze inscriptions like this (金文大字典, p. 2517):

is the sun among trees or something similar and use this finding in your interpretation of 乾. But

is not a component in 乾, we have to add the top-right part of the character as well, which makes the complete component

(full form 倝). This is the true, and most meaningful part of the character 乾.

is often recognized as the earliest form of 乾. The online Dictionary of Character Variants gives variants of

is the significant part in 乾.

To find some meanings of this component the Shuowen 說文 surprisingly put me on the right track. I usually hesitate to use the Shuowen dictionary, because it often gives fancy descriptions that have nothing to do with the oldest form of a character. [27-05-2005 See about the reliability of the Shuowen (and Wieger’s Chinese Characters) the entries by kentsuarez in this thread.] But in this case the Shuowen proved helpful. It says about 倝:

The first part, ‘the sun starting to appear, its rays qianqian‘ is an odd description of a character, and a Western dictionary would never get away with this. It is like defining the word ‘walking’ like “walking, the feet walkingwalking“. But it should put you in the right direction: when the sun comes up the rays of the sun qianqian. Possibly this means that the rays of the sun get brighter and brighter, increasing its intensity while the sun is climbing higher.

At least two things in this sentence from the Shuowen are fascinating. First, the Shuowen speaks of qianqian 倝倝, and this reminds me of the only text in hexagram 1 where the character qian 乾 appears, namely line 3. Here it says

‘The junzi all day long qianqian.‘

Here we have the character 乾 repeated, just like 倝 in the Shuowen. This doubling of the character, and its place in the sentence, suggests that 乾 is a verb, the doubling also suggests continuity or intensity: it goes on and on. Richard Kunst says about this reduplication:

There is such a pronounced tendency in both the Shijing and the Yijing to describe junzi with one or another reduplicated expression that we may define the pattern “junzi X-X” or “X-X junzi” as a literary device, a kind of an epithet for the nobility.(The original “Yijing”, p. 397)

With the description from the Shuowen in mind, we get the picture of a junzi who works on his position all day long, extending the rays of his influence.

A nice interpretation, but there is another interesting fact in the sentence from the Shuowen. It says “

as phonetic”. This is odd, because

is clearly different from

. Is the Shuowen suggesting that

is the same as 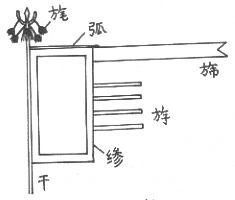 On oracle bones and bronzes

Or something similar. It is the picture of a flag or banner. Banners are closely linked to warfare, and there are many characters which carry the flag component and have meanings which refer to war or tribes. James C.H. Hsu says in his (truly magnificent) The Written Word in Ancient China:

The banner was very important in ancient times. The place where the banner was set up indicated the place where the tribe was stationed. The banner was often raised high in the air, so that everyone could see it, and usually accompanied the commander into battle (…). The people of many tribes built their villages in the shape of a square or a circle in order to emphasize the fact that they were of the same blood and shared community and defensive concerns. Yangshao culture villages were constructed on this pattern. All the houses in a circular village faced inwards towards the large building used for gatherings which was built in the centre. The banner was usually set up near it. Therefore, the oracle bone graph

(modern character zhong 中 “center”, “middle”) shows a place marked with a pole, which may or may not have had banners attached to it

, indicating a certain area with a banner pole at the centre. In some oracle bone inscriptions there are divinations made by the king in which he asks whether there will be a strong wind on the day when he establishes “the centre”, no doubt the place where the banner would be set up. From this we know how important the place was where the banner was set up and that this practice strongly reflected earlier tribal organization. (p. 838)

Drawing of a pole with some decorative streamers. The pole was placed in the center of a circle or dial so that a shadow cast by the sun on a calibrated dial could measure solar time – much like the gnomon or style of a sundial. (Wang Hongyuan 王宏源, The Origins of Chinese Characters (“漢字源入門”), p. 195)

, as already mentioned in the Shuowen. There is a resemblance between

; we might surmise that they share a common origin which points to banners. [18-05-2005 James Hsu confirms in a personal e-mail that 乾 might be related to a sundial.] Whatever path you choose, the meaning of banners in

seems unavoidable. This is even more the case when we look at the old forms of

The big 金文大字典 dictionary gives a lot of interesting information about 倝 (p. 5430). It quotes Xu Zhongshu 徐中舒 （1898—1991）, the late expert on oracle bones inscriptions, who says that 倝 is the original character of 韓 (also written as 𩏑) and 榦. In bronze inscriptions 榦 has the meaning of ‘to support’ (金文常用字典, p. 615-616). 韓 was the name of a feudal state around 1100 BC. which bordered the Western Zhou region and had to pay tribute to the Zhou. Ode M261 from the 詩經is devoted to this state. A feudal state brings and receives support. But 韓 and 榦 also share a common meaning, namely that of ‘railing of a well’. A railing is some kind of border. I mention this because it comes in handy later.The 金文大字典 also brings to our attention an oracle bone character which has to do with banners & support:

Three men are supporting a banner. In all instances that are found of this character the pole (in Chinese also described with 榦) has shapes like

in the bronze form of 倝.

In other words, gone is the meaning of ‘The 日 sun rising behind the trees of the

jungle’, as Karlgren says (Analytic Dictionary of Chinese and Sino-Japanese, 299; quoted in Wenlin).

are pictures of banners, and if we want to find a meaning of 乾 we have to take this into account. This idea of a banner or flag in 乾 is already mentioned by Hellmut Wilhelm, who writes in his Sinn des I Ging:

The primary element in this character appears to be radical 62 (戈), which represents a flag pole. In the old writing it was depicted by a planted halberd with a yak’s tail fluttering from it. It was the symbol of the commanding authority in the army. To this primary element two meaning additions (“Bedeutungszusätze”) were added. The first is the word for ‘sun’, but not the sun as a heavenly body but as a light giver, a word we also find in the character yang 陽, one of the main principles in ancient Chinese philosophy. The second meaning addition is the character for ‘water’. (p. 40)

In a footnote Hellmut thanks his colleague Erwin Reifler for his help in the analysis of the character. Reifler’s studies of Chinese characters are not entirely undisputed, to say the least, but in this case he seems to be quite right, even if he regards

as 戈, a character which in its old form is close to the old form of

. The character 岸 looks very similar, in its modern form, but also in its old form. It has several meanings, but the ones that are of interest here are (漢語大字典, p. 766-4)

These meanings are similar to that of 韓 and 榦, which share the meaning ‘railing of a well’. The character 岸 adds to this a high position, as James C. Hsu said, “the banner was often raised high in the air, so that everyone could see it”.

There is another thing which connects all the characters I have mentioned so far: they are all close in pronunciation, which might point to their common origin, the component

I do not have the proper sources to check how the pronunciation was round 1000 BC, and there is a big chance that it was different in that time. Nevertheless it is remarkable that today all the characters have at least the same final (weiyin 尾音).

Having said all this, it is difficult to come to a conclusion about the meaning of 乾 in line 3 of hexagram 1. My personal guess is that line 3 is a lamentation of a junzi: he always has to be worried about his position and how he can be of support to the king, and can get support in return. This explanation will probably not satisfy you and might even be dissapointing after this detailed exposé, but it is not my style to come with elaborated wild assumptions which are not 100% percent backed up by facts. And facts, well, they are hard to get in this field.