Just as with the name of hexagram 1, the name of hexagram 2, kun 坤 is difficult to translate, because the character only occurs in the Yijing and nowhere else (accept later books in which it is a reference to hexagram 2). In the Mawangdui text the name is chuan 川, ‘river’. This character is related to the character shun 順, ‘smooth; obey, follow’, which is a known symbol for kun. Shun is also known with the meaning of xun 巡, ‘make an inspection tour’ (漢語大詞典, vol. 12, p. 231), which we will see at line 2. The component 巛 in the character 巡 is a known variant of 川. The Xiping Stone Classics use a character which is almost identical:

. Note the hooks at the bottom, which distinguish it from 川. It reminds me of the plough being pushed into the earth, making furrows. That is why I tentatively translate kun as ‘ploughed land’. For more about 川 and 巛 see Ding Sixin  丁四新, “楚竹書與漢帛書<周易>校注”, p. 351-353.

牝馬之貞 could refer to a divination about a mare whether it is pregnant or not. On oracle bones pi 牝 refers to a female ox (新編甲骨文字典, p. 47). It is possible that we have to read 牝馬 as separate words, ‘female ox’ and ‘horse’. See for the phrase youwang 攸往 meaning ‘far journey’ here.

Zhu 主 refers to the topic or subject of the divination (主體). The Fuyang Zhouyi fragments contain additional comments on how to interpret a certain line of the Yi, one of the fragments has the sentence …主得百病不…, ‘…the subject will have numerous diseases, will not…’.

Ploughed Land: Greatly accepted offering.
Advantageous divination for female oxen and horses.
The lord undertakes a far journey.
First he goes astray, later he gets it.
Advantageous.
In the West and South allies are obtained,
In the East and North they are lost.
Divining about peace: auspicious.

The fifth line of hexagram 2 has the sentence

Most often this is translated as something like ‘yellow lower garment/skirt. Greatly auspicious’. The Mawangdui manuscript made me ponder about another translation for chang 裳, a translation which fits the imagery of hexagram 1 and 2 and which would be my favourite – if I would get rid of some disturbing facts that discredit this translation. Continue reading →

The first three characters of line 2 of hexagram 2, 直方大, are most often translated as ‘straight, square, great’ (Wilhelm, Wu Jing-Nuan, Huang, etc.). It is a sentence which has always baffled me because it did not make any sense to me at all. Continue reading →

Here in the West we are not familiar with the work of Wu Enpu 烏恩溥 , but in China’s world of Yixue he is a well known name. His speciality is the discovery of astronomical phenomena in the Yijing, like for instance hexagram 22, which Wu sees as a comet. In the only book I have of him, 周易 – 古代中國的世界圖式 (‘Zhouyi – Ancient China’s design of the world’), he gives a lot of his findings. I find much of his arguments far-fetched. With Wu it looks like ‘I want to find it, therefore I shall find it’. But it is good to be acquainted with his ideas, even though you do not agree with them.

Let us take the mare from hexagram 2 as an example of Wu’s way of thinking. Because the word for mare, pinma 牝馬 is made up of two characters, ‘female’ and ‘horse’, and this is important for what will follow, I will speak of it as ‘the female horse’, however odd this may sound. Wu says about pinma 牝馬 (p. 52 of the aforementioned book): 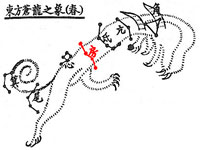 Wu means this: the word for mare is pinma 牝馬. Pin 牝 is ‘female’, that is what it means. But ma 馬 is ‘horse’, and a horse is yang 陽, male. In the Shuogua 說卦 we read, “乾為馬”: “Qian (yang) represents ‘horse’ “. With pinma 牝馬 we have female and male, and because of that it can serve as another name for the Heavenly Coach-and-Four, a constellation which in the old days was seen as the division between yin and yang.
By the way, taiyangdao 太陽道, ‘the Way of Great Yang‘, and taiyindao 太陰道, ‘The Way of Great Yin‘ can also be translated as ‘the sun’s course’ and ‘the moon’s course’. But I am not sure if that is meant here, therefore I chose to translate it literally.

利牝馬之貞.
“Favourable in a consultation for a mare”. If the oracle is consulted to know whether a mare (pinma 牝馬 = ‘female horse’) is carrying a young, then this is a favourable answer: the mare is carrying. In metaphorical sense this means that this hexagram is favourable for all female matters.

Pin 牝 generally means ‘female, feminine’ (雌性的獸類，引申為雌性的), and this is how it appears in the oracle bone drawing of this character: an animal combined with the sign for  ‘woman’, in other words a female animal. But pin also has another meaning, namely ‘gully’ or ‘valley’ (溪谷). Already in ancient times is hexagram 2 linked with the feminine, and it is interesting to see that the meaning ‘valley’ makes a connection with other texts like the Daodejing 道德經, where we also find ‘valley’ combined with the feminine. In chapter 6 we read:

“The valley spirit never dies, it is called ‘the mysterious feminine’ “.

In old books like the Da Dai Liji 大戴禮記, ‘Notes regarding rituals, from Dai Senior’, it is said: 丘陵為牡，谿谷為牝 – “hills are mu 牡 masculine, valleys are pin 牝 feminine”. A link with the genitals is obvious. Earlier another meaning of pin 牝 was ‘the part of a lock that receives the key’ (古代鎖具容受鍵的部分). In the Liji 禮記, the Book of Rituals, we therefore read “the key is masculine, the lock is feminine” (鍵，牡; 閉，牝也).

Although the name of hexagram 2, kun 坤, appears for the first time in the Yi en therefore we cannot look at other literature that can give a hint about the meaning of this character, we could speculate that it’s original meaning is ‘valley’. The character consists of two parts, 土 for ‘earth’ and 申 for ‘streched’ (according to Karlgren, GSR 421a). This could refer to a valley, and we can add that valleys are often fertile (= feminine) because of the rain water that flows to it. I am not very fond of speculating so I’d better stop here, nevertheless I found it worth to mention it in my diary.