The oldest source for the coin method 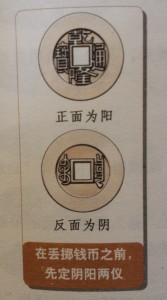 During the last meeting of the Dutch Yijing group there was confusion about the assignment of the numbers 2 (yin) and 3 (yang) to the sides of Chinese coins. Old Chinese coins have four Chinese characters on one side and the other side is blank or has two Mongolian characters. When I looked for Chinese sources on this I found that there isn’t much agreement on the designation of the numbers, one of my books says that the side with Chinese characters is yang (see picture), and in this lecture Moxiang Liao 廖墨香 seems to follow the same designation, but there are websites that say otherwise. Curious about the origin of the coin method and wanting to know how the Chinese people in the early times did it I did some digging.

In this passage Jia uses the words shao 少, ‘few’ and duo 多, ‘much’ to name the two sides of a coin, but it isn’t clear what is what: is shao the side with the four Chinese characters or is it the other way around? My dictionaries don’t say anything about this either. But when I looked for the word danqian 單錢, which appears in Jia’s passage, the  Hanyu Da Cidian 漢語大詞典 dictionary was helpful:

古代錢筮法術語。謂擲三錢 而成二面一背，象徵少陽之爻。
Technical term from a coin divination method from antiquity. When you throw three coins and you receive two mian 面 and one bei 背 it is called like this. This symbolises a young yang-line.

‘Two mian 面 and one bei 背’. What is mian and what is bei? In this case the dictionaries also assume that this is common knowledge. The Hanyu Da Cidian says that bei is the reverse side of a coin (錢幣反面的專稱), well, that doesn’t help much. Fortunately Jack Chiu helps me out with his book The Secret of Wen-Wang Gua. He says:

Chinese people used to call the side with Chinese characters the Face or Mian 面, and the other side the Back or Bei 背.
(p. 82)

If Nielsen is right, and if my sources are correct, then this would be the oldest reference to the coin method.

5 Responses to The oldest source for the coin method