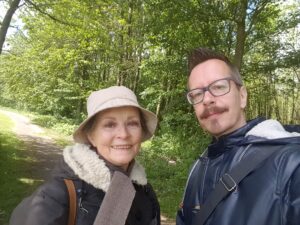 One of my students mentioned to Lotti the video in which I discuss this take on Chinese characters, a take that in my opinion is wrong and hardly sustainable. This prompted Lotti to write a blog article in which she defends her position: ‘Etymology, fact, and fiction’. This article is my response to that blog post, although I would have preferred to add my comments to Lotti’s article, but there is no option to do that.

I know that many (most?) sinologists agree that the sound is not related to the meaning. It makes me wonder – how can Chinese, when they talk, understand each other when the sounds they utter have no meaning?

The number of syllables in the Chinese language is limited, which means that a sound like ma can have a wide range of meanings when spoken on its own. But that is not how a spoken language works: words, and syllables, are spoken in context, and the context makes clear what specific meaning is meant. This is not different from most other languages that have homonyms and homophones: when I use the word ‘current’ the context will make clear if I refer to a stream of water or to the present. In Chinese spoken language it works the same, although, considering the nature of the Chinese language, it is possible to say something that is completely unintelligible to the listener. This, however, is not related to the composition of Chinese characters.

Harmen gave the example of the character ching. Of course he didn’t say what qing means, because it “has no meaning”.

According to Wenlin and Guoxuedashi dictionary qing means: nature’s color, green, blue, greenish black; not ripe. It is also when things only have their own natural color. Many characters with qing have to do with clear or clean (up). Blue and black are the colors of heaven, green of nature. (…) When there are no clouds which cover the sun, the sky is blue, the day is clear, qing. An insect with big clear wings and an intense-blue-green body: a qing, dragonfly. A fish with a blue-green back with black stripes: a qing, a mackerel. 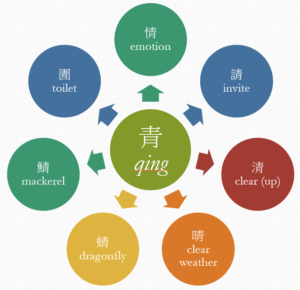 I can see that the meaning of qing in these characters appears to be relevant, and I am willing to admit that this might even be the case here. However, that still does not mean that, as a principle, this kind of reasoning is valid for all Chinese characters. The number of characters in which all components have meaning, as Lotti seems to believe, is far less than the number of characters in which a component is not in any way related to the meaning, as I will show below.

With interpretation and creative reasoning you can link every component and concept together. But the number of characters for which such a link cannot be made without forced reasoning is much larger. 睛, ‘eye’, while more than 80% of Chinese people have brown eyes? 圊, ‘toilet’? 鼱, ‘little rat’? 䑶, ‘small boat’? 綪, ‘name of a plant used to dye silk RED’? There are characters in which the phonetic component can potentially be seen as a meaning component, but you shouldn’t keep that as a rule, because you will have to maneuver yourself through very imaginative explanations to explain all characters that share that component.

Lotti says about the earliest form of the character: 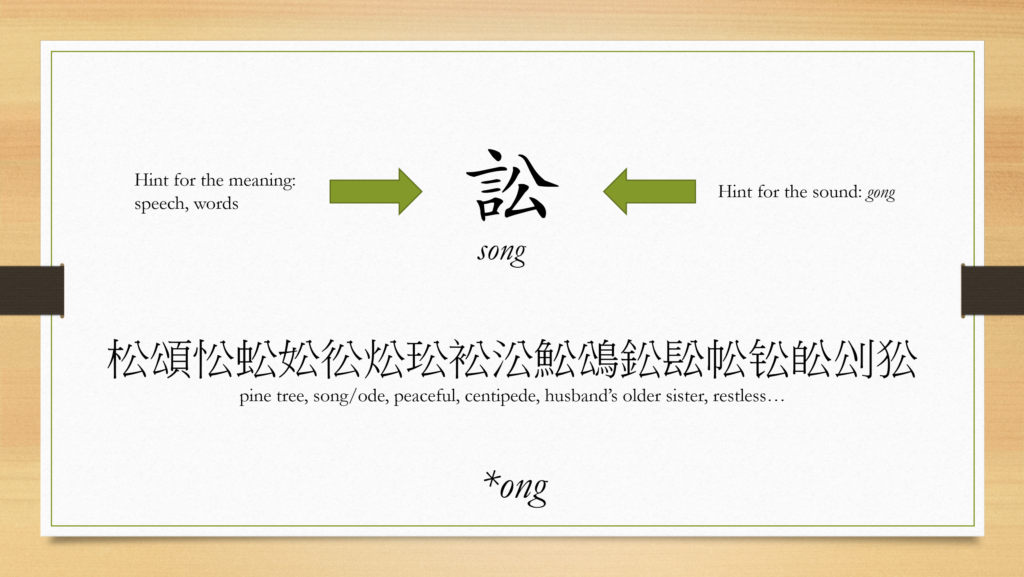 Gong 公 on its own is indeed a title (amongst several other meanings), but using that as a meaning component (similar to what Alfred Huang does) gives you problems with other characters that share the 公 part:

It is very difficult, not to say impossible, to see how the meaning of the component gong 公 as a title attributes to the meaning that each character in this list has. But as a sound component it makes sense, because all these characters have a pronunciation that ends with ong.

Qing with radical heart is not only emotion but also inclination, passion: the real color of a heart. Without any meaning to qing, only meaning for heart, how can one guess what it says about the heart?

It is not a matter of ‘guessing’ – when it comes to learning Chinese characters it is mainly a matter of memorization. Creative explanations like ‘the real color of a heart’ can help you with that but it has nothing to do with the etymology of the character. There are too many characters where the meaning of qing 青, ‘green/blue, nature’s color’ clashes with the meaning of the character as a whole. I can add qing 䝼 – ‘support, endure’, qiang 錆, ‘tarnish’, qing 皘 ‘white color’, zheng 靕, ‘straight, not crooked’ (in which zheng 正 is a sound component AND a meaning component), qing 䝼, ‘to bestow, to grant’ to the list that I gave earlier. I have no doubt that with creative imagination you can find a way to link these meanings to qing 青, after all, such is the strength of the mind that insists there is a connection. But these kind of reasonings are in the eye of the beholder, and they are not substantiated by the hard data and facts that we have about Chinese characters and their development.

There are almost 200 characters (at least) with heart in it. Not in all of them as radical, but in a large number.
How can one understand when so many different characters only have the meaning heart? BY THE SOUND!! The sound which ‘has no meaning’. Talking is all about sound.

If, in spoken Chinese, the sound were to convey the meaning, then we really have a problem, as the video that I linked to earlier will show. When a speaker says “yào” it will not be clear if she means 要 ‘to want’, 藥 ‘medicine’ , 耀 ‘shine’, 鑰 ‘key’, 曜 ‘bright’ – all these characters are pronounced yào. The sound of a character, on its own, cannot contain the meaning. But within the context of a sentence, story or situation, it will make sense.

Even now a very large number of people cannot read or write, but they can talk and understand what is said, without knowing anything about radicals, but they do understand context.

I think this is something we can agree on: context is everything. The same goes for an answer of the Yijing – the meaning of a hexagram comes to the surface when it is linked to the situation, question or context. But seeing every component of a Chinese character as a parts that are relevant to its meaning does not hold up, as I have shown in the many examples in which I can’t see a link between the meaning of the sound component and the overall meaning of the character. I find that Lotti’s etymological explanations, that cannot be backed up by other sources, are often far away from facts and border to the realm of fiction. Having said that, I want to emphasize that I admire Lotti’s work, and her website is of great benefit to the Western yixue 易學 community (and the crisps that she serves every time I visit her are delicious). 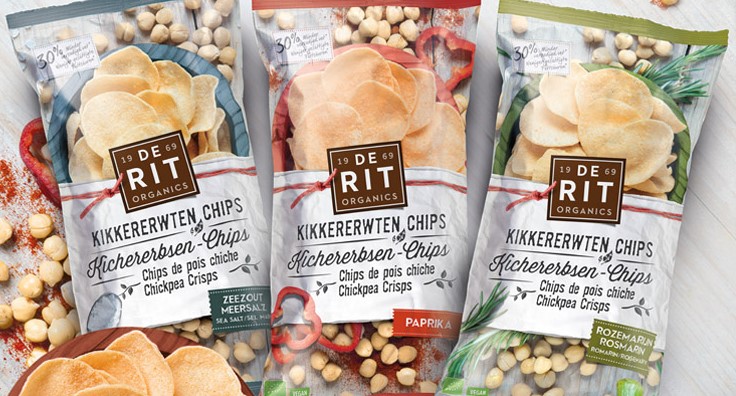 Crisps in blue and green. Ignore the red one.